The Newtonian space and time collapsed in 1905 when Albert Einstein, at the age of twenty-six, published four groundbreaking papers: On the Photoelectric Effect; Brownian Motion; The Special Relativity, and The Equivalence of Mass and Energy. The new concept is that all objects are moving vibrations in the space-time continuum. The quantum physician Heisenberg introduced the notion that the act of observing changes the observed object. The world was thought in pieces, just as the ego, which is perceived as just a particle in an unlimited and unprotected field.

Picasso’s painting Trismegisturian Harlequins (1901-1905) portrayed the neglected offspring of Hermes. Because evolution in art or science is often the result of disrespect and revolt, they were punished with social exclusion for their diverging talents. Simmel and Durckheim considered that the collective always cannibalizes individuality till it becomes socially acceptable. Freud declared in 1906 that the masochistic satisfaction people experience when a theater character suffers on stage originates from the primitive offering rites that suppressed the impulse to revolt. He also stated that love is no remedy against war, because sex and death aren’t enemies but clandestine collaborators.

On December 11, 1910, the human character changed and the modernist consciousness founded itself upon the inherent instability of the new relativist worldviews.Suddenly humankind was lost in a relativistic universe where there were no more rules that could be transgressed and nobody could be accused of abnormality. The Chinese pagoda became popular in European culture as the cathedral of a religion that accepts a void because its five floors symbolize the five mystical nothings of life (earth, water, air, fire, and ether), and the reality of a barrel became its emptiness inside (Lao-tse).

Existentialism placed the individual on a rope that spanned an abyss and turned his daily occupations into acts of courage and perseverance. Language became, like money, an exchange object whose circulation served only as a vector that maintained a sense of community. Wittgenstein perceived the language as the limit of our knowledge and declared, “Wovon man nicht reden kann, darüber muss man schweigen. ” But the modernist thinking crossed the language barriers and stipulated that the unspeakable can be expressed in paintings, music, or mathematical equations.

This hybrid approach to describe the reality gave birth to a new form of scientific art; cryptomathematics.

Cryptomathicians are constantly looking for mathematical equations that are dissimulating themselves behind the barriers of sounds, smells, images and the languages that describe them. They believe that the origins of the whole universe can be reduced to a two-dimensional model on a cosmological horizon where information is gathered and grows in complexity with time. 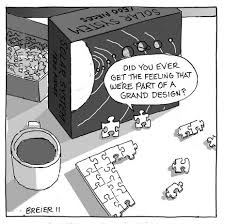 On a smaller metaphysical scale, cryptomathecians are looking for synergies between science, art and religion in the hope to come to a new unified frame of knowledge.

Take an example of the egg and its manifestations in Art, Science and Religion. One could develop an unified ASR theory around this very common object alone. I touched this thought summarily in my post The Egg in Dali’s Work and in Literature.

For those who want a subject that cuts  a little deeper to become the center of a  new paradigm, I give you … WATER. Although my advise would be to stick to the egg: it’s already difficult enough. An egg has an organism’s way to produce another egg.