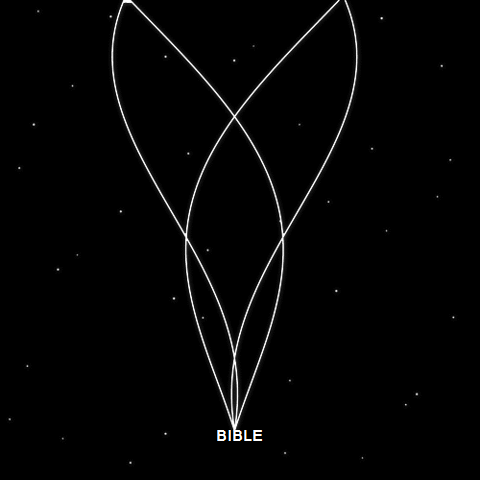 The US Literary Universe.

Since US literature, as represented by the US Library of Congress, has the whole universe as a subject, one could assume that this system is also governed by the same mechanisms that it describes.

In the following two paragraphs I would like to outline some analogies between what most people consider as two disciplines who have little in common; cosmology & literary criticism.

Alan Guth believes that the universe bubbled up out of a pre-universal singularity[1]. During a short moment, all the forces and building stones of matter were one. When the Higgs-field symmetries started to break up, followed a hot expansion[2]. For the function of our actual model of the Big Bang, the particles of our universe must have been organized with such a perfection that cannot be explained by coincidence. This improbable circumstance is known as the homogametic principle.

When the Higgs-field instead of exploding, coagulated, can it be possible that this created parallel universes , divided by energy fields that are dividing the universe into different domains [3].

The Universe is governed by four fundamental forces; Gravity, Electromagnetism, Weak Core Energy and Strong Core Energy with the space-time[4] as background. Following the Grand Unified Theory (GUT [5]) can everything that we can experience in our physical reality be reduced to vibrating algorithms that keep fractalizing in a seemingly random complexity over time.

The degree of our understanding of the cosmological horizon sets also the scale of the universe we can observe. In this sense, future events could already influence the present, depending upon the scale of the applied cosmically horizon[6].

The first Western settlers arrived around 1561 on the American continent and the Bible or – related literature stood at the centre of their existence till 1716. When this first symmetries started to break up, followed a hot expansion of the American Literary Universe. Time in American Literature started with this Big Bang and previous times are undefined. The literature of other times, continents and cultures are considered as parallel literary models.

The most influential parameters of the literary model are subject, language, protagonists and style with a socio-cultural time frame as background. The terms ‘centripetal’ and ‘centrifugal’ are used to categorize these parameters. A parameter is essentially centripetal when it moves inwardly, towards the structure of a text and is centrifugal when it moves outwardly, away from the text to the outer world. In this context subject and language are two centrifugal parameters, while protagonists and style are centripetal.

All works of literature have an origination, an escalation of conflict or paradigm, and a resolution. It works itself through this cycle by going through five phases; orientation, crisis, escalation, discovery and change. Those phases can come in following sequences: linear, nonlinear, interactive narration and interactive narrative.

The degree of our understanding of the literary system sets also the scale of our contextual perception of the individual literary texts. The realization that literary subjects may follow mathematically defined cycles, can make us anticipate eventual future trends in literary works.