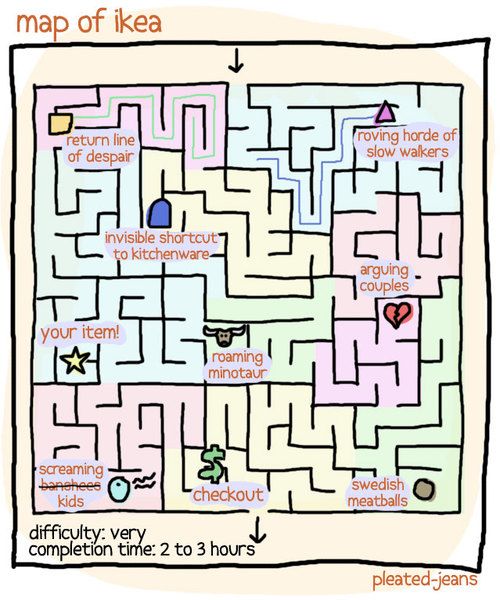 Ikea is a relationship deathtrap; something like Temptation Island or consorts.  One psychologist has even referred to Ikea as “a map of a relationship nightmare.” And she’s not wrong — from beginning to end, the whole Ikea process seems almost engineered to stir up tension among the poor fools who naively enter its doors.

The first phase consists of going there with your partner and to pick out a piece of furniture, a task that can seem be daunting when it means narrowing a zillion options down a handful of items that will fit together into your already existing interior. I’m easy going; I’m telling to my partner she can do what she feels like. She spends evenings on research and then comes this fateful day she wants to see the items before ordering them at the Ikea online shop. Suddenly she starts to hesitate and turns to me and asks, “Which one you like the most; the black or the brown one”. After some consideration, I say, “The black one”. She answers, “OK, then we take the brown one”.

She explains, “Well, you’re famous for your bad taste, so if you say black, brown it has to be.”

I’ve tried to trick her by saying brown when I was thinking black, just to find out that on those occasions she agreed with me. She’s a witch.

Then we get home and she tells me, “Here you have the list of articles I want to order. Get me them delivered before the end of next week.

Ikea deliveries are a nightmare. They bring you half of your stuff and then you have to haggle with one operator after another till you get your last item. Meanwhile I get comments like, “Where are my bedclothes? I’ve ordered a new bed, but now haven’t any bedclothes for it!”

Me (grumbling), “I will call them a third time”.

We move towards phase two of the Ikea relationship test; putting the bed together. 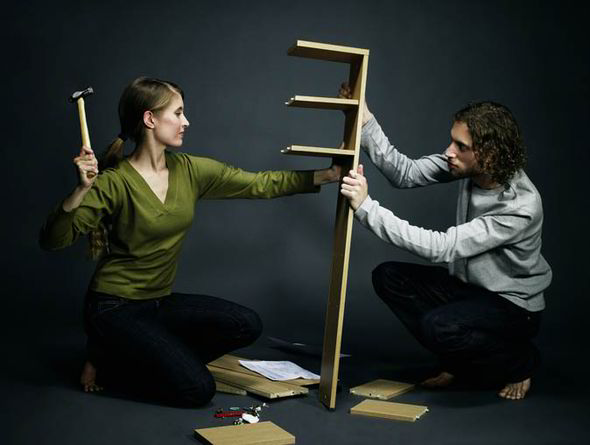 After hours of haggling about the exact placement of the bed and fussing over the manual while we put the bed together, she takes a step backwards and declares, “There is a hole in the middle of the bed”.

We have another look at the plan and it appears that the sidings are mounted upside down. She looks at me accusingly, “You’ve put these sidings ready to mount”

Me, “I see nothing on these damned plans without my glasses”

She, “We’ll have to demount it and put it right”

Me (balking), “It’s 8pm and we still didn’t have dinner. I’m not moving a finger anymore.”

She (sighing), “I suppose we’ll have to sleep tonight in a bed with a hole in the middle”

We flunked the test, but somehow our relation survived. I suppose that the coming night we will just roll towards each other in the middle of the bed, made up with bedclothes from the previous one.