We live in a time where conspiracy theories are rampant and slowly start to realize how this disinformation is contributing to a logarithmic growing degree of social entropy. There is a whole section of literature dedicated to it and I like to call it the paranoid history books.

The mother of all conspiracy theories is the myth of the existence of some secret overlords, called the Illuminati, operating secretly on establishing a New World Order. With some research, you can trace the origins of this myth back to 17th century Bavaria, where some German intellectuals founded a private group in which they discussed and questioned the power grip upon society by religious leaders and the nobility. Not very surprisingly, very soon afterwards the group’s activities were forbidden and its members prosecuted. The group dissolved quietly when its activities were gradually outlawed. 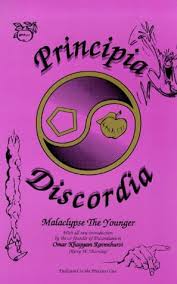 Till in the sixties some hippie revolutionaries undusted the concept to propagate civil disobedience, practical jokes and hoaxes. They were organized in a group that called themselves Discordianists and worshiped Eris, the goddess of chaos. One of their main grudges was that the world was becoming too authoritarian, too tight, too closed, too controlled. So they decided to shake up things a little by disseminating misinformation through all portals – through counter culture, through the mainstream media, through whatever means. And they decided they would do that initially by telling stories about the Illuminati.

But the group missed its target. Instead of getting people to wake up to the prejudices they inhabited, conspiracy theories started to bloom. One of the first examples was the ‘cover-up’ of who shot John F Kennedy – by attributing it to the Illuminati. This theory would inspire The Illuminatus! Trilogy, a book that was presented by it’s authors as an epic fantasy, but soon acquired a cult status among conspiracy believers as the ultimate revelation in disguise of a work of fiction.

And now we live in a world that is full of conspiracy theories and, more importantly, conspiracy theory believers. From  the Obama ‘birther’ conspiracy,  the widely held belief that 9/11 was an inside job carried out by US intelligence services or that the Covid 19 epidemic has been orchestrated to achieve some major  sociological shift.

Conspiracy theories have become a mechanism for the government to control the people. Politicians, like Vladimir Putin and Donald Trump, are starting to use conspiracies to mobilize support. They encourage people to become disengaged with mainstream politics and instead to engage with fringe politics with racist, xenophobic and extremist views.

Humankind’s generally uninhibited capacity for imagination makes it difficult for today’s truth-finders and fact checkers to debunk the Illuminati myth. The conspiracy literature just contributes to that, but is sadly enough a huge money generating engine.

The political landscape is unraveling at an alarming speed and instead of rules becoming too tight, they’re becoming too loose. Hence you have an increasing degree of social entropy inside a country with the most over armed citizens of the world. Make America great again by debunking all the conspiracy theories and their propagators.