Even a hardcore plotter can sometimes be surprised how, by adding or changing some little detail into the narrative while typing out a manuscript, can give a completely different dynamic to the plot of a novel. All the sudden you’re pansing in the hope you’ll manage to keep your story-lines together as you’ve been outlining them.
Into my case it happened when I struggled with a particular section that contained a missing link combined with a logical irregularity. Instead of returning to the plot-table and give the novel’s framework an overhaul, I pansed my way through it because I’m approaching the deadline for this manuscript.
And suddenly there you had it; badaboum, a ghost ship and the rainbow serpent.
The Flying Dutchman (Dutch: De Vliegende Hollander), is a legendary ghost ship that can never make port and is doomed to sail the oceans forever. In European maritime legend, its appearance to seamen is believed to signal imminent disaster. The skipper of this vessel is the ghost of the Dutch seaman Van Straaten.
In the novel it becomes a Kuntee, that’s the boat of the Jemadar (leader) of a tribe of river thugs, who’s also a necromancer. The boat entered the story because his original boat was taken by one of my main protagonist on another travel. It’s just that this ghost boat is not just “a thing”, but a specter driven by its own prerogatives. It seemed to be a suitable ride for a necromancer and damned the complications it causes.

The rainbow serpent entered through the backdoor because of some oversight into the plotting of this novel. Much of the world building of this novel revolves around the five alchemist elements; Earth, Fire, Air, Water and Ether. Al these elements have a shrine guarded by a dragon. Till I realized that for some reason I omitted to assign a dragon to the water shrine. Now I had done already a lot of writing about this water shrine and to make up for my mistake, I launched the (hopefully believable) explanation that the water dragon lost its geis (similar to being under a vow or spell) towards the shrine during what’s called “The Schism of The Reality”, an occurrence that was the consequence of a great battle between two highly evolved races, causing the destruction of a continent and the splitting up of the reality in a three dimensional “Materium” and a coexisting seven dimensional “Labyrinth”. After the water dragon broke free, it merged with Scylla, a creature that used to be a nymph but who was turned into a sea monster by her half-sister Circe. Together they merged into what the Australian Aboriginals call The Rainbow Serpent. 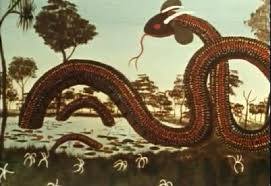 The Rainbow Serpent or Rainbow Snake is a common motif in the art and religion of Aboriginal Australia. Not all of the myths of the ancestral being link a rainbow with the snake, and not all describe the being as a snake, but there is usually a link with water or rain. There are many names and stories associated with the serpent, all of which communicate the significance and power of this being within Aboriginal mythology.
And so I had some stuff to chew on while trying to meet my deadline.