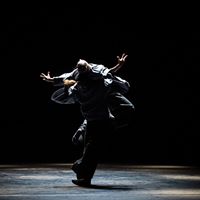 The title of this post refers to a dance company that that takes inspiration from very similar sources as I do as a writer. The research behind their art is rooted in physics and astrophysics, as well as in their personal insight into Eastern mysticism, fascinated by the connections that lie between these seemingly different fields and how these shape our human experience of ourselves.

Was their first production, created in 2015. It symbolized nomadic encounters and recognition in a merger of bodies that fell into the vortex that brought them there, driven by some animalistic instinct. The nomadic lifestyle involves ways of thinking about space and people which may be important for successful economic development in marginal areas. In my series, The Maharajagar, the main protagonists are getting banned for twelve years and are forced into this lifestyle, using all kinds of vehicles and making the strangest encounters

This duet was created in 2016 and carried synchronicity and symbiotic relations as leading themes. Zero does not exist in the same way as our concept of an “object as an entity” exists.  Zero does not exist as an object.  We can of course perceive zero by the absence of a particular object. Synchronicity and symbiotic relations are very important metatheses in the Maharajagar.

Is a visually astonishing outdoor duet performed in the round that explores the relationship between humankind and Earth’s permanent natural satellite: the Moon. Also here we see the recurring theme of the circle while revisiting the mystical place the Moon holds in the history of human culture. It premiered in March 2017 at the Brighton Festival. In the Maharajagar this theme is explored by referring to the cyclical nature of human evolutionary history.

This was the first of Humanhood’s commissioned series exploring the elements present in nature, drawing from the fluid potency of this most grounded element in nature. It is performed by 7 dancers and was premiered at the Contemporary Dance Festival at Esplanade Theatres on the Bay (Singapore) on the 15th and 16th June 2018. In the story of the Maharajagar, the other elements; ether, fire, water and air, are leading themes through which the main protagonists carve themselves a place into the order of things.

Is defined in geometry as a surface of revolution generated by revolving a circle in three dimensional space around an axis coplanar with the circle, and commonly known as a donut for its shape, is found everywhere in nature, from an apple to the Earth’s magnetic field, and described in Eastern practices as the energetic field. The individuals in this performance create in synchrony an ever evolving entity, becoming space and time itself, expanding out from the core/heart and imploding into singularity, like the centre point of a Torus. Rhythm will become visual, sonic and kinesthetic. This piece is expected to go in premiere during the spring of 2019.The Maharajagar handles this theme by posing fundamental questions about the multi-dimensional nature of the reality as a projection by a cosmological horizon on the time-space continuum.

Humanhood is a dance company worth traveling light-years to see.

Shaharee Vyaas is a polyvalent cryptomathician. As such he likes to hover above the demarcation zone between Science, Art, and Religion. Where most philosophers perceive the language as the limit of our knowledge, the cryptomathic method crosses the language barriers and stipulates that the unspeakable can be expressed in paintings, music or mathematical equations. View all posts by Shaharee