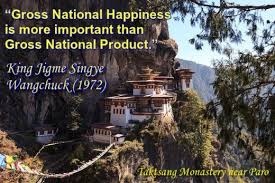 Throughout modern history, societal progress has been measured in terms of GDP. The higher the GDP, the more developed a country, so goes the general belief. There is, thus a mad rush for increasing GDP.

Hence, over time, GDP came to be seen as a surrogate for societal wellbeing – something it was never designed to be.

If the basic purpose of development were changed from the pursuit of profit to the pursuit of higher well-being in all its dimensions, the true level of happiness on the planet would certainly go up. The Stiglitz Sen Fitoussi Commission stated this. The Beyond GDP initiative in Europe recognizes it.

For Bhutan, the drive to glimpse the true nature of development began early under the leadership of their kings. Bhutan aspired to become a country where progress was holistic, inclusive, equitable and sustainable. Where political and spiritual matters were in balance.

The four pillars of the Bhutanese model are; Good Governance, Sustainable Socio-economic Development, Preservation and Promotion of Culture and Environmental Conservation.

Over forty years since its introduction, Bhutan has ensured that GNH has been the unifying force behind all policy formulation, and has shaped the country’s five-year planning cycle. From a GNH perspective, it is understood that a decline in traditional heritage and cultural wisdom will lead to a general weakening of society. If you look around, many countries have lost much of their culture with the dynamic changing times. Bhutan, despite her lack of military might or economic power, maintains a distinct authority and a special identity of her own.

They adopted innovative technologies to grow new green sectors in the economy as a foundation for the creation of new and decent jobs in the economy. With the increase in urbanization and a growing middle class in Bhutan, they hope that the demand for modern transportation to support its urban lifestyles can be met by the carbon neutral electric car option. Within the next years, Bhutan will move to consolidate their sustainable and organic agricultural practices as even more reinforced policy. 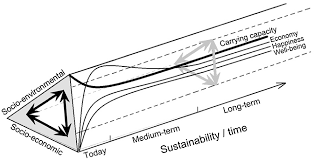 The current business model, with its over emphasis on profit maximization, on increasing shareholder value at almost any cost to environment and to the community, is unsustainable. Businesses must explore fostering happiness and well-being as an alternative business purpose. Bhutan will look inwards towards developing and empowering their small businesses, creating a climate that supports small business growth and encouraging citizens and young graduates to create businesses rather than seek employment. By investing in the growth and development of small businesses across the country, the massive result to be realized from this effort can facilitate economic self-reliance for Bhutan and build GNH business culture from the ground up.

Overall, in Bhutan, there was a significant increase in the subjective happiness in 2015 as compared to 2010. Subjective happiness has fascinated many researchers because it adds new quantitative data. But it does not capture altruism or responsibility. It does not reflect care for the environment either – the happiest countries worldwide include those that are polluting our planet most. So it is not appropriate as a standalone goal for society.

It is heartening to see the positive changes across so many of the dimensions of their lives. Yet the GNH Index is an honest 360 degree control room, not a fair weather tool. It also holds up a mirror and shows them where they are becoming weaker, which may give a little cause for soul-searching.

In Bhutan, addressing the spiritual dimension of a person’s life has been a traditional way of bringing the person’s well-being to the forefront. Yet in the past 5 years, people’s spirituality level has decreased slightly. So they decided to establish spiritual centers and requested their highly accomplished lamas and practitioners to help them to develop inner peace and wisdom, both in traditional ways and using modern media and English.

Bhutan has learnt a great deal from older democracies. Yet they may also have learnt some of their less positive habits. The movement for change, the move into the mainstream, the shift of paradigm is underway. Together, we must work to build societies that are sustainable in every way and offer a better quality of life for everyone.