Buddhism and the internet 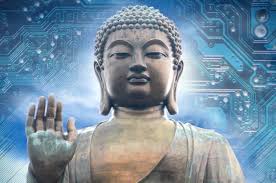 What is it about this faith of smiling Buddha, orange robes and golden temples that I see thriving in the little corner of the internet where I dwell, while the rest of the world is thought to have become increasingly secular?

Widespread musical and artistic experimentation; the emergence of ‘youth culture’ as a powerful economic force; the increasing availability of mind-altering recreational drugs; the collapse of western colonial projects; and the intense controversies around the American Civil Rights movements and the wars in Vietnam and  the Middle East, all contributed to a profound questioning of received values.

Cheap international travel and the diaspora of Asian Buddhist teachers in the West enabled people to experiment with practical methods such as meditation and chanting. These practices contrasted with the religious beliefs and rites that many had grown up with, and that could be deemed passive and stuffy by skeptics.

People come to Buddhism expecting something different. They often have serious spiritual or life questions in mind, but at the same time some are fed up with what they see as conventional religion.

In a similar vein, the absence of elaborate hierarchies or involvement in politics makes Buddhism attractive in our egalitarian age. And as established religion has diminished as a source for authoritative guidance about how to live and what to live for, many people have sought fulfillment and understanding in a more personal way from science and the arts.

In particular, the religions familiar in the West, Christianity, Judaism and Islam, all situate humanity in a finite timeline, running from revelation to an ‘end time’ – all of which is being managed by God, whereas Buddhism places the human situation in an infinite and neutral cyclical cosmos. Some people find this more compatible with their understanding of the world.

Other people have explicit problems with “God”. Buddhism side steps God and offers a vision of humanity and the spiritual life that is not dependent on a deity. It lays out a path of self-transformation, and people like the idea of being in control and taking responsibility for their lives that can come with this.

Looked at another way, Buddhism offers seemingly practical ways of developing wisdom and compassion, free from guilt and obligation. And of course, I think there is the simplest explanation of all for why Buddhism is hip, which is that it offers something that is helpful and meaningful, and that people just like it for what it is in itself.

4 thoughts on “Buddhism and the internet”